This is Ezmy today:

This is Ezmy six years and two days ago: 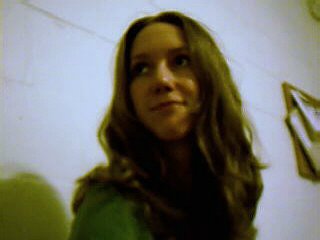 Six YEARS (and two days…I totally forgot to post this on Saturday) ago. That’s when I started this blog. And do you know why? Because I was dating some d-bag and I needed an online escape. And look what it’s become! Ok, not much of anything except 2193 days of my life written down and whined/hoorahed about. But still….SIX YEARS (and two days).

By way of honouring this momentous occasion, I’ve re-done the meme from my very first post on February 11, 2006.

1.Honestly are you in love right now?

2012 Ezmy: Yes, with my fantabulous husband A. And my pumpkin coffee mug.

2. Honestly, what color is your underwear?

2012 Ezmy: Purple lace. It is again laundry day (when is it not laundry day, really?) and these things are the worst.

3. Honestly, what are you doing right now?

2006 Ezmy: Contemplating another cup of tea which would be suicide at this hour.

2012 Ezmy: Thoroughly enjoying my second cup of coffee. Tea is for the weak!

4. Honestly, what did you do today?

2006 Ezmy: Pretended to teach, cleaned the house, worked on thesis, played with cat, talked to sister….procrastinated….

2012 Ezmy: 45 minutes of yoga, showered and threw on clothes, changed a diaper, made breakfast for myself and the kidlet, unloaded dishwasher and dishrack, cleaned kidlet, got kidlet ready to go outside, deposited a cheque at the bank, mailed two letters and a parcel, picked up household toiletry items for the next two weeks, folded diapers, switched over laundry, replaced vent in bedroom ceiling, changed a diaper, read stories to kidlet, made myself and the kidlet a snack, watched Sesame Street, talked to sister while making puzzles and building towers with kidlet, made lunch for myself and the kidlet, cleaned kidlet, folded another load of laundry, read stories, put toys away with kidlet, changed a diaper, put kidlet down for nap, swept floor, mopped up cat vomit, glanced at news headlines, answered emails, finally had two cups of coffee. It’s 1pm.

5. Honestly, do you think you are attractive?

2006 Ezmy: Well, I don’t need to walk around with a bag on my head. But I’m not going to enter a beauty contest anytime soon.

6. Honestly, have you done something bad today?

2006 Ezmy: No I did that last night. Stupid seductive Guiness…

7. Honestly, do you bite your nails?

8. Honestly, wouldn’t you rather be having sex right now?

2012 Ezmy: What a ridiculous question. Of course I do. I like loads of people. Ok, maybe not loads but some at least.

2006 Ezmy: I think so. Someone must. People like George Bush for gods sake.

11. Honestly, did you answer all these questions honestly?

4 thoughts on “six years of ezmy”