Man I’ve been busy. Some of my more recent resolutions have required more time than I expected, leaving little extra time to write about them. Not a bad thing, I suppose, but still. My four or five loyal fans must be desperate for an update. :P

Well here it is:

July 6 (well, technically July 7 in the end): ezmy figures out where the water temperature adjuster is. Once she decides to be brave enough to take that cover off, she will no longer get burned alive when doing diaper laundry or washing dishes. 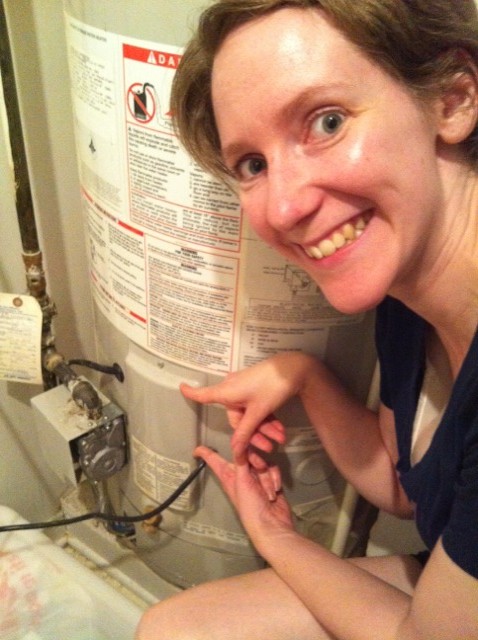 July 7: ezmy hangs the spiffy mobile from sexy AB in Budsie’s room. Scale model of the planets in our solar system. Do you see Pluto? I do! I, like the makers of this mobile, am of the mind that Pluto is still a planet. Pfft to scientific evidence that suggests otherwise. (note: the picture is terrible because I had to take it while Budsie was sleeping. But you get the idea.)

July 8: ezmy starts some curtains for Budsie’s room (finished product below…kinda dull but I’ll jazz them up soon…and take pictures during the day). She also continues the Friday pizza night with a scrumptious oregano, mushroom and garlic number. Nom!!

July 9: ezmy uses up some more gift cards from her bridal shower, purchasing some snazzy indoor footwear and other sexy items that she will not be posting pictures of, much to your dismay. The goal was to use all gift cards but I couldn’t find time for the reflexology or the mani/pedi. Next week…

July 10: ezmy starts puzzling again! YAYA for puzzles. This one is particularly challenging. Damn Van Gogh and his love of blue.

Today’s resolution: ezmy posts an ad for a rocking chair and for a 3 drawer white dresser for Ewan’s room. She also finishes this little project to hang in Budsie’s now complete room:

Phew! And this week is looking just as busy. I’ve got family coming in from Vancouver and Toronto. YAYA for visits from the W/Z crowd! But don’t think this will get in the way of my daily projects. I’ve been feeling more inspired than usual lately. Something about being very poor but very happy. :)

Update on previous resolutions: Yoga every day has officially become as important as food. I skipped it yesterday in favour of completing Budsie’s room and felt completely off balance all day. Lesson learned. In other news, thanks to yoga I have also accomplished this resolution. Woot!!

One thought on “july 11: a visual update”