*pictured here with the lovely LG

This time last year, my plans for the third trimester were squashed when I was told that I would be spending the next 12 weeks on bed rest. Lame! At the time I couldn’t even picture The Budsie. Keeping my eye on the prize was tough when all I had to do all day was watch re-runs of the West Wing and stew about labour.

But here he is! One year later and my little dude is here and rocking my green socks. In an effort to put the memory of last year behind me, LG and I took Budsie out for Guinness cupcakes and coffee at The Flour Shoppe in the Glebe. Nom! 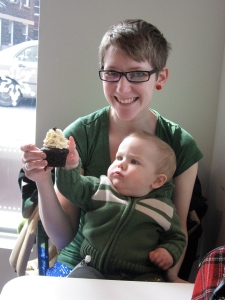 Unfortunately, Budsie could not partake in said cupcakes – he was stuck with a St. Patrick’s snack of avocado, cucumber and cheese. Still, good times had by all. And I must say, I thoroughly enjoyed my Guinness cupcake. Guinness is still best in a glass but a good cupcake runs a close second.

In other news, A. comes home today! And it’s sunny! So I’m going to take Budsie out for a stroll to pick up some beer for my man and while I’m out, I’ll think of a good resolution for today….

One thought on “st. patrick’s day with the budsie”