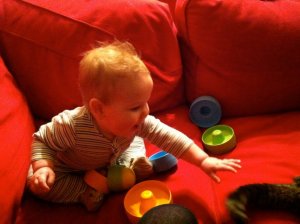 …put her baby to sleep. Wait, that sounds wrong. I resolve to get Budsie to sleep. By himself.

Right now, Budsie goes to bed so easily…as long as I’m the one who’s around. We have a great little routine that started working when he was about 6 months old: we head downstairs, he goes in this sleep sac and then we cuddle and read a story, he falls asleep during story and I pop him in the crib. Great, right? Yeah well the problem is that if anyone else tries this routine, he screams. And doesn’t sleep. Not so great.

I went through a brief period when Budsie was 7 months old of trying to get him to sleep by himself. That is, I would pop him in the crib, give him his pacifier, say goodnight and close the door. Unlike most babies, Budsie didn’t cry. What he did instead was play. For an hour. I’d keep checking on him and he’d be chatting away and the pacifier would be on the floor. And after a few attempts, I stopped trying because, well, I got lazy. I needed to sleep and I knew how to get him to sleep quickly.

But the thing is, if I’m going to be going out and having a life and all, I need to at least try to get Budsie to go to bed without me. And this starts by getting him to go to sleep by himself. I’m not going to take out the bedtime story but maybe I’ll read the story upstairs instead. I’m open to suggestions on this matter.

An update on previous resolutions: I went out last night and it went surprisingly well. Phew. However, I also forgot to take my eye make-up off last night and now look like I play football. Ah well, can’t win them all.