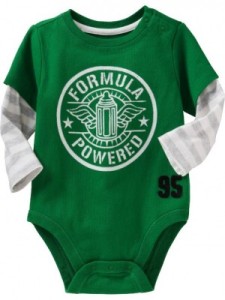 A while back, I purchased the above onesie at Old Navy. Budsie was 100% boob-fed at the time but I thought the controversy surrounding this onesie was a little ridiculous so I picked one up by way of protest. I don’t even shop at Old Navy (my problems with them have less to do with the promotion of bottle-feeding and more to do with who makes their clothes…which is, I think, a bigger issue). I’m all for boob-feeding but as I’ve indicated in a number of posts, I’m also all for a women’s right to choose and if boob-feeding doesn’t work for you, you shouldn’t be made to feel bad about it. Some of the comments that came out after this shirt was released….yeesh. Things like ‘formula shouldn’t even be available without a prescription’ or ‘women who formula feed are selfish’. Shut up. Seriously. I think it’s really important to be supportive of breast-feeding mothers, and I agree that there isn’t always enough support out there. But this holier than thou attitude from women who have successfully breastfed their children really grates my cheese. Sometimes it’s just not possible, for various psychological and/or physical reasons and maybe, just maybe, we should all just shut up and mind our own children.

Anyway, so I got the shirt. Someone also gave Budsie a shirt that said “I’m a breast man” so I think he was nicely balanced out, politically speaking. He still wears both of them. I really enjoyed boob-feeding him while he was wearing the formula shirt. Contrasts make me happy.

Then, a couple of months ago, Budsie got two teeth. Cute little bottom teeth. Cute, SHARP little bottom teeth. And boob-feeding, well it became kind of challenging. All through November we battled, him chomping and me trying to train him not to. I looked up every trick out there, consulted breastfeeding guides, talked to folks, but nothing seemed to work. And the biting got worse. By December, it was pure agony. It got to be so bad that the very idea of feeding him was starting to give me the willies. I could hear the Jaws soundtrack in the back of my head whenever his mouth came near me. The final straw came when we were on xmas vacation in BC and he drew blood. “That’s it!” I said, “no more boob.” I mean really. Why should I have to sit back and let my boobage get mangled? I have scars from this and that just doesn’t seem right. If I’m going to have scars on my boobage, they should be from some crazy piercings I got back in university or something. Not my child’s teeth. And I shouldn’t be scared of my baby. So I tried some formula. It went down the hatch no problem. Indeed, I had him weaned to formula in two weeks (I did continue boob-feeding him at night until about a week ago when he started sleeping through the night).

And may I just say, PHEW. Call me selfish, but I’m so much happier now. My boobs are all mine! I can wear whatever I want! I don’t reek of boobmilk all day long! And you know what? My little munchkin is just as happy as he was before. He’s a big kid, he eats an enormous variety of solid food and he guzzles back Similac like nobody’s business. It’s not ideal, but whatever. One day, he’ll probably eat Kraft Dinner too. And drink something awful like Gatorade or Coke or (oh I hope not) Red Bull. On the scale of things, a few months of formula isn’t going to kill him.

So I’m ignoring the dark looks I get from women at the coffee shop when I whip out my bottle (this is hilarious to me – judged if you boobfeed in public, but also judged if you bottlefeed…should children just not eat then?). My kid and I, we have a great relationship that I can honestly say has improved on my end ever since I switched to the dreaded Similac. Woot.

2 thoughts on “>How ezmy got her boobs back”